Our fascination with Indians, past and present

The “Yakari, Winnetou & Co. – Our fascination with Indians, past and present” special exhibition traced the “Yakari-Mania” in Germany, examining it in the context of past forms of children’s fascination with Indians. The exhibition was created specifically for kids, both in content and design. Young visitors travelled back in time to compare the romantic images of Indians of their parents and grand parents with their own visions, based on the toys exhibited and multiple interactive stations. Among other things, they could see toys from the early 20th century compared with the contemporary Yakari images.

The stories on the young Indian boy Yakari led to a renaissance of children’s fascination with Indians with the cartoon series, which has been running since 2005. It originated in 1973, when the Swiss-French comic duo of Claude de Ribaupierre and André Jobin invented the character of Yakari. The romantic vision of Indians presented in Yakari follows in the tradition of Karl May’s and James Fenimore Cooper’s famous Wild West stories. As a result, these children’s stories are an expression of the contemporary interpretation of “Indians” in popular entertainment culture. 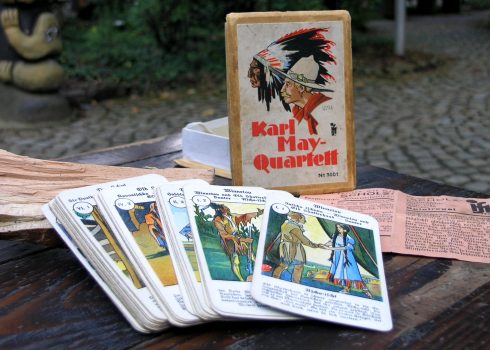 Showcase exhibition "Yakari, Winnetou & Co. - Our fascination with Indians, past and present", Karl May playing cards